DECATUR, Ill. (WAND) – The Decatur Airport will have a new air service starting in February 2020.

SkyWest will take over at the airport, according to the Department of Transportation(DOT). The decision was announced on Thursday.

SkyWest will begin their two-year contract on Feb. 1, 2020 through Jan. 31, 2022. The service will include 12 nonstop round trips per week to Chicago O’Hare International Airport (ORD) using a 50-passenger Canadair Regional Jet.

In 2017 DOT, reselected Cape Air to provided service for two years. This was after a back and forth battle for service with both air carriers. The Decatur Park Board also reversed their decision for Cape Air in 2017 after business and community leaders pushed for a better jet service. At the time ADM said they would offer $100,000 for airport refurbishment and would guarantee 5,000 seats over two years. WAND News reached out to ADM to see if that offer was still on the table for the 2019 vote. A company spokesperson shared the following statement, "We are pleased that passenger jet service will now be coming to Decatur. We have long believed that this could be a catalyst for local Decatur businesses and has the potential to help drive economic growth and job creation in the region."

Cape Air provided 24 nonstop flights every week to Chicago and 12 nonstop trips every week to St. Louis-Lambert International Airport (STL) using a nine-passenger plane. From January 1, 2019 to November 30, 2019, there were 2,779 that utilized the St. Louis Flights. SkyWest will not provide air service to STL.

Before DOT’s decision many community leaders sent in letters in support of SkyWest as the Decatur Airports jet service. Below are some of those letters.

Mayor of Decatur, writes in her letter that SkyWest’s service will attract and help retain passengers in the region by offering greater access to the national air transportation network, as well as increase the number of passenger enplanements at Decatur Airport.

In addition to those letters, the department also received several letters from people in the community. The majority of the letters expressed the support of SkyWest. However, there were a few letters in support of keeping Cape Air.

Dot said the decision is still pending proper certifications from SkyWest. They hope Cape Air and SkyWest will work together to make a seamless transition.

Airport Director Tim Wright says will be a team effort.

"The two organizations, the two airlines will work together to make sure it's a seamless transition of air service that way there's little or no disruption between the Cape Air flights, and the SkyWest flights coming and going," Wright explained.

Wright says Cape Air and SkyWest still need to work out how passengers who have already bought tickets for 2020 will get those honored.

He says those passengers can first reach out to Cape Air, and if needed, SkyWest and United.

Harrison also urges flyers to support, and fly with SkyWest in the future.

"We need everyone to fly out of Decatur. Other organizations and other communities have gotten jet service, and if it wasn't supported they did end up losing it. So we really need everyone, when you're thinking about traveling for next summer's summer vacation, think about flying out of Decatur," Harrison reflected. 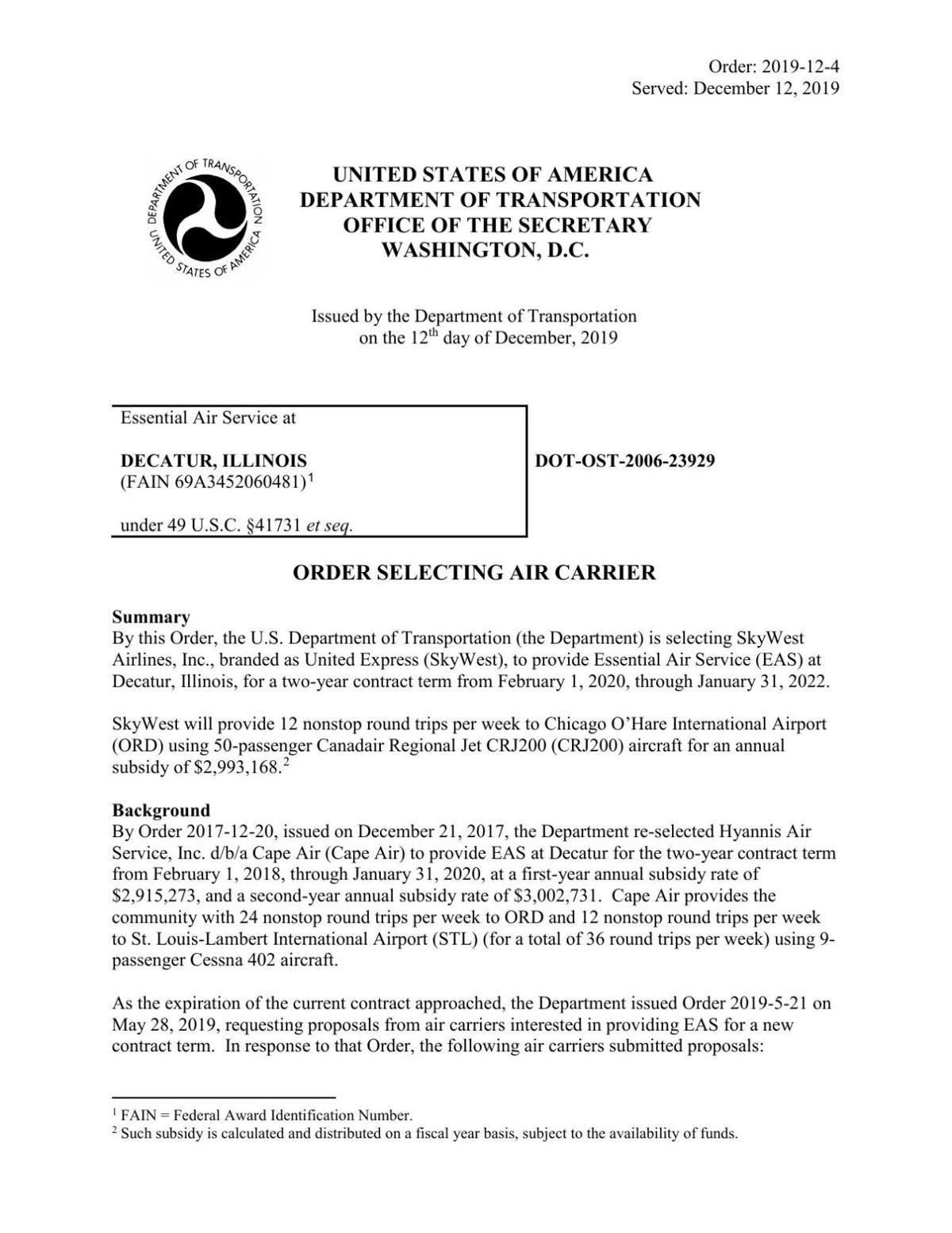