According to a lawsuit filed by the American Civil Liberties Union (ACLU) on behalf of Jaylan Butler of Coles County, Butler said in February 2019 he was held at gunpoint by officers from the East Moline and Hampton Police Departments — along with officers from the Rock Island County Sheriff’s Office and two other officers from unknown law enforcement agencies.

“Mr. Butler went from riding on a bus with his college swim team… to being forcefully held on the ground by police officers with a handgun pressed into his forehead while a police officer threatened to ‘blow [his] (explicit) head off’ if he moved,” the lawsuit states.

In the lawsuit filed in the Central District of Illinois, Butler’s attorneys allege that their client did not commit a crime, but “continued with detention and arrest” after realizing they were “mistaken in arresting Jaylan”.

“My dad taught me at a young age what to do when you are stopped by police officers – stop instantly, put your hands up, drop anything you are holding, and drop to your knees,” said Butler. “I hoped I would never have to use this advice in my life, but all that changed in seconds.”

The incident happened at the Mississippi Rapids rest stop just across the Illinois border on Interstate 80. The lawsuit says around 8 p.m., the charter bus Butler and his team were on stopped at the rest top and several people, including Butler exited the bus.

At this time the lawsuit alleges several law enforcement vehicles pulled into the rest stop and demanded Butler stop, and put his hands up.

“Defendants shouted at Mr. Butler ‘get down’ and ‘don’t (explicit) move. Stay right there’,” the lawsuit says. It goes on to say three officers forced Butler to lay down on the ground, and three officers put the college athlete in handcuffs, and at least one officer pressed down on Butler.

“Another defendant was squatting down in front of Mr. Butler. He put his handgun against Mr. Butler’s forehead and said, ‘if you keep moving, I’m going to blow your (explicit) head off’,” the lawsuit states.

During the interaction with police, the team bus driver and the swim team coach attempted to tell officers he was apart of the Eastern Illinois swim team. After realizing Butler was not the suspect they were looking for, the lawsuit alleges Butler was not released from custody, but instead, the suit alleges, Butler was searched, and placed in the back of a police car before Butler was “forced to provide photo identification.”

“What happened to Jaylan is an example of the harmful police interactions that people of color experience far too often, but which receive much less attention. These officers forcibly arrested and searched Jaylan without reasonable suspicion, probable cause, or any other lawful justification. They never told Jaylan why he was being arrested, even after they realized their mistake. Instead, it’s clear they based their decision to arrest and harm Jaylan on the fact that he was a young black man,” said Rachel Murphy, Staff Attorney, ACLU of Illinois.

Following the incident, Butler told at least two of the officers he wanted to make a complaint. One of the officers is accused of telling Butler “there’s nothing I can do” and did not provide badge numbers, agencies or provide him with any information to file a complaint.

Since the February 2019, incident, the lawsuit says Butler has been traumatized by the incident and has had trouble concentrating at school and participating in activities.

“I was scared and depressed. I remember sitting in class the next day, looking at the bruises on my wrists and replaying the events of that night,” said Butler. “Now whenever I see a police officer, I don’t feel safe—I feel scared and anxious.”

Butler is suing officers from the Hampton Police Department, the East Moline Police Department, and the Rock Island County Sheriff’s Office for false arrest, excessive detention, and excessive use of force. He is represented by attorneys at the ACLU of Illinois and Sidley Austin LLP. The case is pending in the U.S. District Court for the Central District of Illinois.

WAND has reached out to all parties involved. The East Moline Police Department said they were just served with the lawsuit and the city attorney is reviewing it. The Rock Island County Sheriff responded to WAND with a news release, saying they were not aware of the concerns by Butler until the lawsuit was served.

"Upon receipt of the lawsuit, a preliminary fact finding was conducted, which determined that Deputies Pena and Asquini arrived after Mr. Butler had already been detained by officers from other agencies, having only brief interaction with Mr. Butler and the other officers, leaving shortly thereafter to continue the manhunt for a fugitive in the area that was in process. At this time, I am confident that the allegations against Deputies Pena and Asquini are without merit."

A phone call to the Hampton Police Department has not been returned. 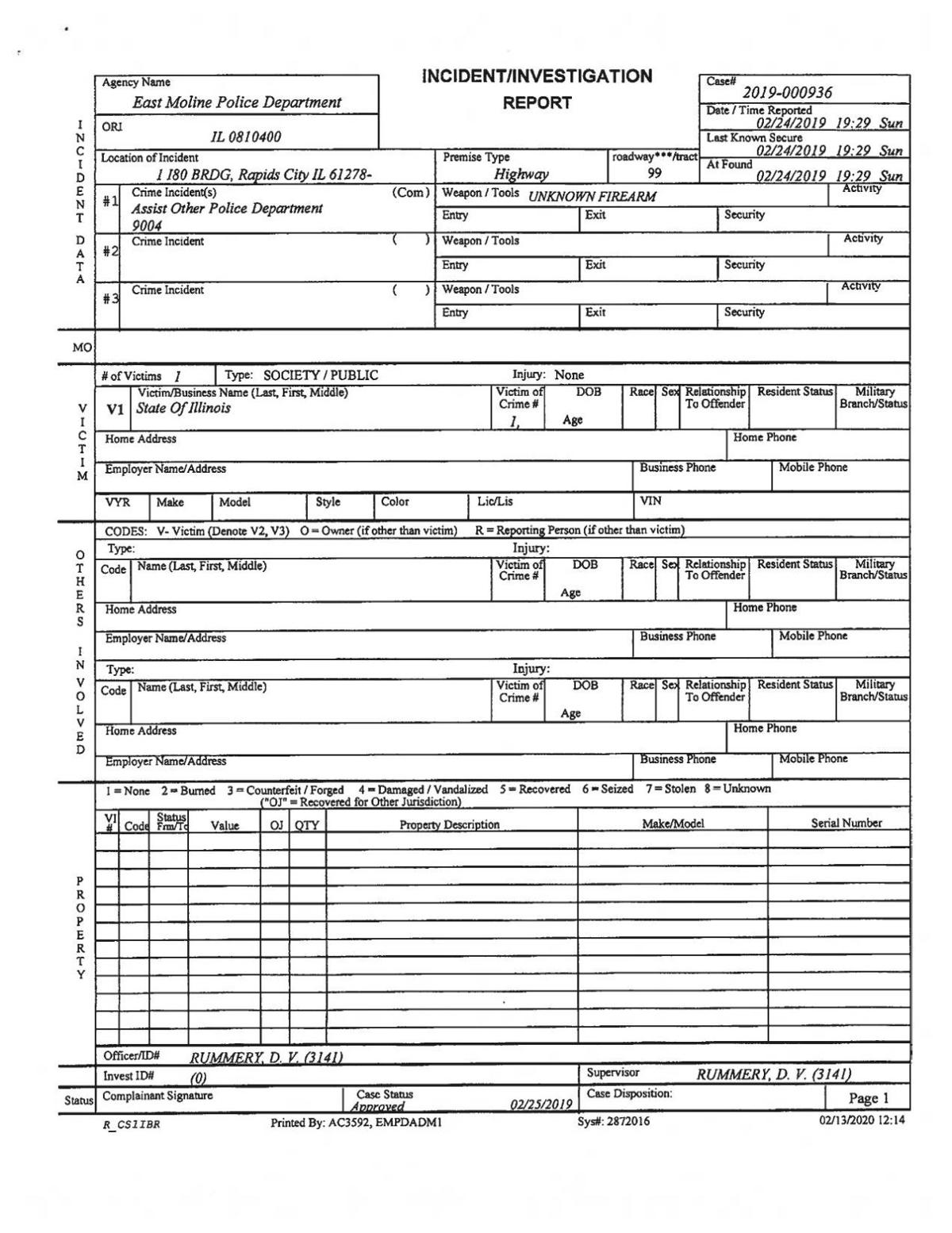 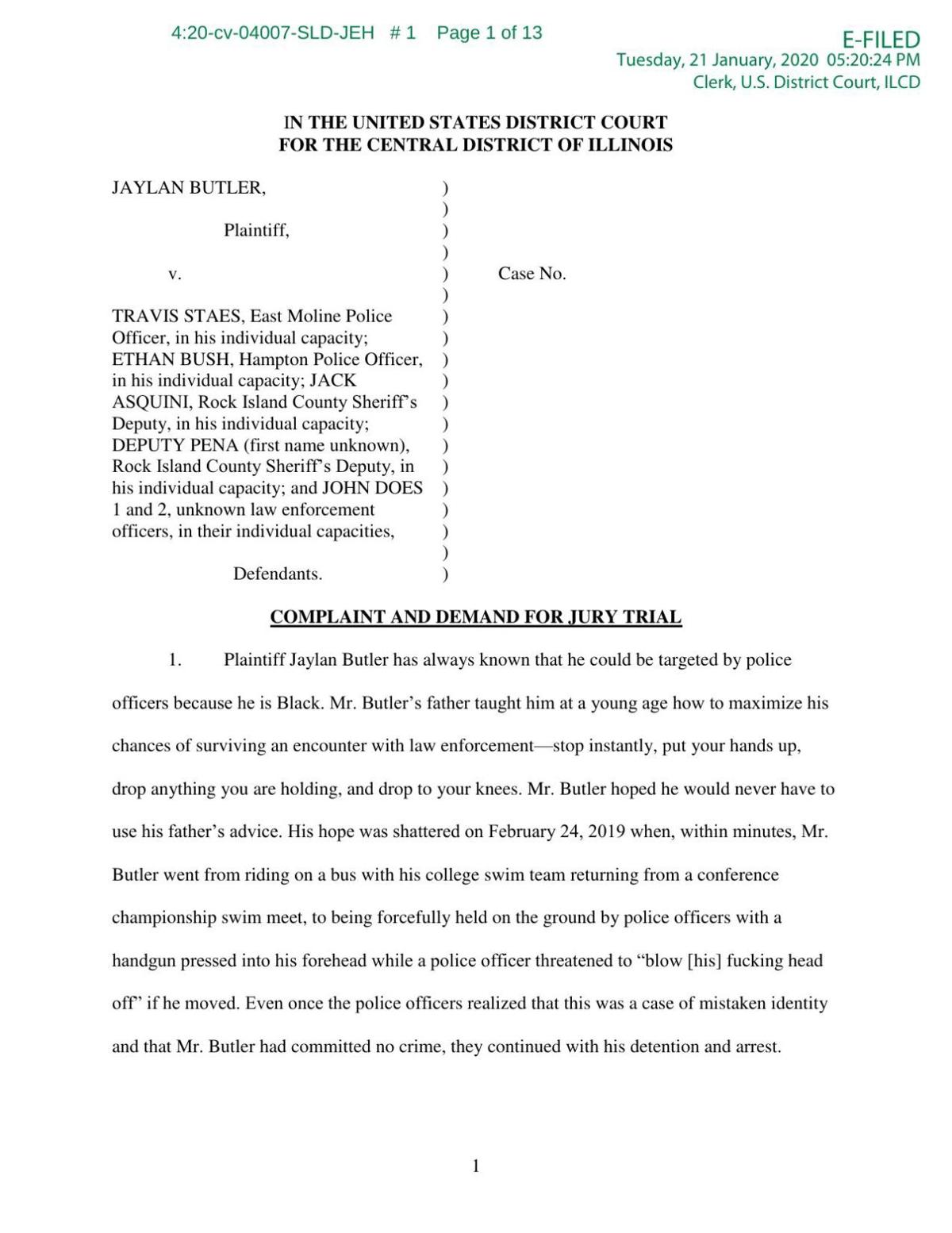 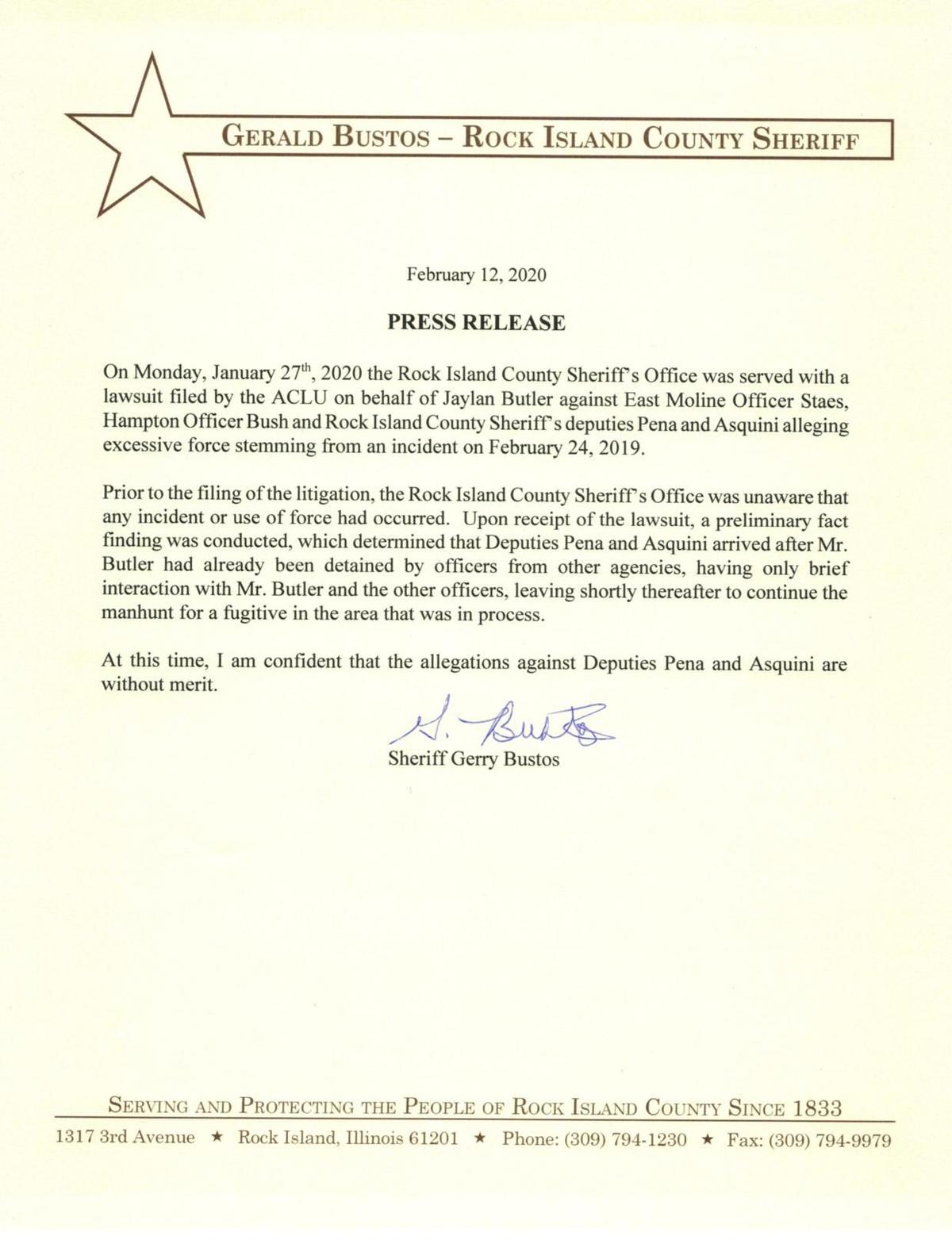