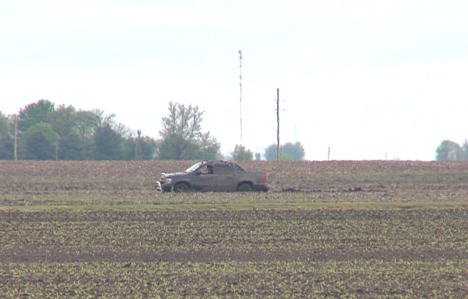 ILLIOPOLIS, Illl. (WAND) - A man has been arrested after deputies said he was involved in a standoff with law enforcement after his vehicle became stuck in a field.

Sangamon County Sheriff Jack Campbell told WAND-TV the sheriff's office responded at 6:45 a.m. to a report of man who had violated an order of protection. He said this occurred in the 400 block of Ford Street in Illiopolis.

Kevin Wicker was arrested and charged preliminarily with violation of an order of protection, criminal damage, unlawful use of a weapon, fleeing and alluding, and having a revoked FOID card.

Officers were called out just before 7 a.m. for report of a black SUV driving in the fields north of Illiopolis.

Deputies located the vehicle, but the driver continued to flee through the fields.

The vehicle eventually got stuck in a field.

Deputies were able to make contact with Wicker via cell phone.

Wicker continued to try and get out of the field, but was not able to.

Deputies said they saw he had a gun in the vehicle.

Around noon, they said Wicker put the gun on top of the truck in the direction of negotiators and surrendered.